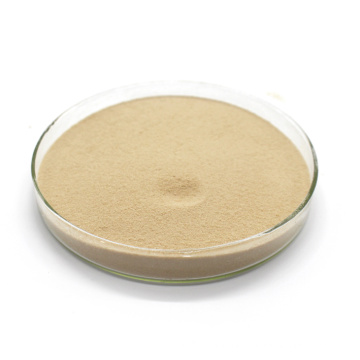 Acacia senegal, also known as gum Arabic, comes from acacia tree trunk exudate, so also known as acacia gum.
The main components of gum Arabic are high molecular polysaccharide and calcium, magnesium and potassium salts.
It mainly includes gum aldehyde, galactose, glucuronic acid and so on.
Good quality gum Arabic is amber in color and has large, round particles.

Gum Arabic consists of two components, 70% of which is composed of polysaccharides with no or little N, and the other component is a protein structure with high relative molecular weight.

Light white to yellowish brown translucent block, or white to orange brown granular or powder.
It is a safe and harmless thickener and naturally solidifies in the air.
Odorless, tasteless and flammable.
In water can be gradually dissolved into acidic viscous liquid, after some time, the viscosity will be reduced, solubility of about 50%(W/V), insoluble in ethanol.
Form a stable condensation layer with gelatin or albumin. Free Arabic acid is obtained by precipitating it with acidic alcohol.

The structure of acacia gum contains some protein substances and rhamnose, which makes it very good hydrophilic and lipophilic, and it is a very good emulsifying stabilizer of natural oil-in-water type. However, the emulsifying and stabilizing effects of gum Arabic from different tree species are different. The general rule is: the colloid with high rhamnose content and high nitrogen content has better emulsifying stability.

The food industry
Gum Arabic has good emulsifying properties, especially suitable for oil-in-water emulsifying system, widely used as emulsifying stabilizer in emulsifying essence.
It also has good film forming properties. As a microcapsule film forming agent, it is used to convert essential oils or other liquid materials into powder form to prolong flavor quality and prevent oxidation. It is also used as an essence carrier for bakery products.

Gum Arabic can hinder the formation of sugar crystals, used in candy as anti-crystallization agent, prevent crystal precipitation, can also effectively emulsify the milk fat in milk candy, avoid overflow. In coke and other carbonated drinks, gum Arabic is used to emulsify and disperse essential oils and oil-soluble pigments, so as to avoid the pigment circle at the bottleneck caused by the floating of essential oils and pigments during storage.

Beverage production
It stabilizes flavor and essential oils in the production of soft drink concentrates.
Gum Arabic is also used as a fogging agent in beverages with vegetable oil and resin to increase the variety of beverage appearance.

Candy manufacturing
Used for traditional hard (wine) gummy candy, soft candy manufacturing. Can also be used as a foam stabilizer for marshmallows.
Gum Arabic basically does not produce heat, is a good water-soluble dietary fiber, is used in health care products, candy and drinks. Gum Arabic also has the function of lowering cholesterol in the blood.


Printing industry
The printed pages are mainly rubbed with gum Arabic. Rub the colloid on the plate, after drying, cover the plate with a hardened film, so as to prevent oxidation. Arabic acid (X - COOH) in Arabic gum is a good detergent to remove the greasy plate. After rubbing Arabic gum on the layout, a better hydrophilic film is formed to improve the hydrophilicity of the layout.

Allied Extracts Solutions is a comprehensive food and chemical additive provider. Our company has been working in the food and chemical additives industry for more than 10 years, understanding the industry technology, industry development prospects and customer needs. We had established good cooperative relationship with many domestic manufacturers. As a comprehensive service provider, we constantly explore new products and new markets, matching users and manufacturers with the best solutions to meet their needs. Our company has a high quality and efficient sales and procurement team, meanwhile rigorous and enthusiastic. We are committed to providing customers with the best solution, so as to achieve our own value. Our philosophy is Precise Service, Long-term Win-win.